This is a major contribution to political thought from conservatism’s greatest contemporary proponent. Originally published in Britain in 1980 and revised in 1984, this edition – the first ever in the United States – is a major rewriting of the work. Scruton’s idea of conservatism – what in America we tend to call «paleo-conservatism» – might well shock the sensibilities of those American conservatives» who view it as little more than the workings of the free market. Conservatism, says Scruton, is neither automatic hostility toward the state nor the desire to limit the state’s obligations toward the citizen.

Rather, conservatism regards the individual not as the premise but the conclusion of politics, a politics that is fundamentally opposed to the ethic of social justice, to equality of station, income, and achievement, or to the attempt to bring major institutions of society (such as schools and universities) under government control.

The conservative outlook, says Scruton, is neither outmoded nor irrational. On the contrary, it is the most reasonable of political alternatives. The evils of socialism, he maintains, lie precisely where its supporters find its strengths, and the conditions for the credibility of socialism have long since disappeared. Neither socialism nor liberalism can come to terms with the real complexity of human society, and both appear plausible only because they direct attention away from what is actual, toward what is merely ideal.

From earlier editions of The Meaning of Conservatism:

«The book provides exactly that swift kick on the intellectual bottom which every undergraduate student of political science needs, most of them more urgently than ever before.» – T. E. Utley, (London) Daily Telegraph

What principles should govern our relations to the nation-state, to the environment, to other species, to other cultures and to other ways of life? How should we approach marriage, religion, evil and mortality? How should we respond to relativism and nihilism in their current forms? What explains the rise of totalitarianism, and the fatal attraction that it exerts over the educated mind? What is Enlightenment, and what residue has it left in our view of ourselves? Those are some of the questions addressed by Roger Scruton in this scintillating book of philosophical reflections. Well known as a commentator, Roger Scruton makes no concessions to intellectual fashion, and is forthright in expressing what he believes and why he believes it. The result is challenging, but informed throughout by a humane and compassionate outlook. Scruton’s targets are shown to deserve his sceptical assault on them, and the vision that he defends, of a society ordered by custom, tradition and national loyalty, is one that will appeal far more widely than to orthodox conservatives.

‘What may be found here is a collection of acute observations about modern attitudes, arguments underming their essential assumptions, and references to the past which enable the reader to set moral and intellectual enquiry into a wide frame of reference.

The essays are certainly polemical, and are clearly intended to be; they are, however, elevated above the trivial rhetoric of modern politics, and achieve a distinction that is at once apparent and readily accessible.

His essays are prophetic assaults upon the superficial and false understandings inherent in the substitute morality now mandatory in modern materialist thought…there remains intellectual engagement of a high order.’ 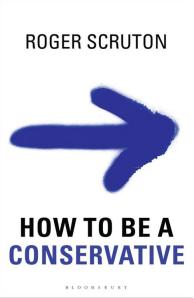 What does it mean to be a conservative in an age so sceptical of conservatism? How can we live in the presence of our ‘canonized forefathers’ at a time when their cultural, religious and political bequest is so routinely rejected? With soft left-liberalism as the dominant force in Western politics, what can conservatives now contribute to public debate that will not be dismissed as pure nostalgia? A personal and witty book, in which the author explains how to live as a conservative in spite of the pressures to exist otherwise.