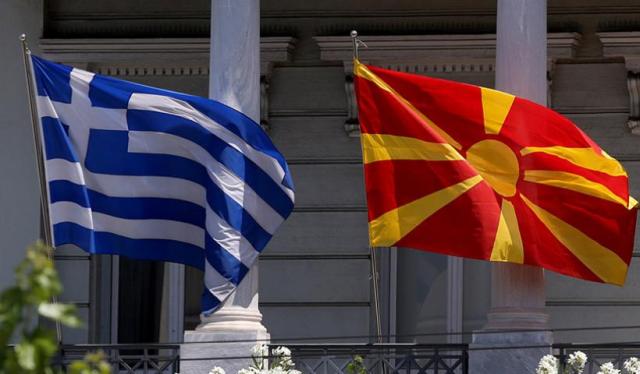 In your latest analysis you wrote that your position on the name issue is that the possible solution should not contain the word Macedonia at all, and that the adjective «Macedonian« should not be allowed for naming the language and the nation. On the other hand the position of the ruling VMRO-DPMNE party in the neighboring country led by Nikola Gruevski, is that there will be no change of the constitutional name Republic of Macedonia  while also there won`t be any modifications in the name of the nation and the people as Macedonian. Do you agree with the majority of the Greek public opinion, that considers VMRO-DOMNE as the most non flexible political option in Macedonia, because of this position but as well as because of the Skopje 2014 project ?

I wrote that the Greek government should not accept the name containing the word Macedonia nor its derivatives.  I am fully aware of the position adopted by VMRO and Mr. Gruevski in relation to the name of the country. Mr Gruevsky’s –  and not only Mr. Gruevsky’s – intransigence and fanaticism has been repeatedly demonstrated.

The use of the symbol of the Vergina Sun, even your current flag denotes the Vergina Sun.The renaming of Skopje’s airport “Alexander the Great”.Insulting actions at the Carnival of Vevčani. The defilement of the Greek flag in 2008, with the substitution of the Nazi swastika for the Christian Cross although Greek people paid a heavy price for fighting both against Mussolini and Hitler at the same time when VMRO volunteers under the leadership of Mihailov and Kaltcef made up companions and fought alongside the 4th SS Mechanized Infantry Division.

Lastly, your country’s government never showed any sign of even the slightest compromise. It is worth mentioning that during Costas  Simitis’  premiership, the Greek government had accepted the name «Republic of Macedonia-Skopje» and the  government in Skopje rejected it. That name, which is contrary to the wishes of the Greek people, gave almost everything that Skopje wants, yet your government did not accept it. That tells us something about your government’s mentality on the use of dialogue.

On the other hand – I mentioned Skopje 2014 project before – we have a situation where the opposition in the neighboring country, SDSM lead by Zoran Zaev, for e.g. agrees with Greece in showing discontent with this huge project of the ruling party, while at the same time we had the opposition leader years ago saying that on this issue it wouldn`t be so bad if we comply a bit. Do you think that if the opposition, by any chance, wins on the upcoming early parliamentary elections in the country in December, there could be also changes in the attitude regarding the name issue talks ?

It clearly demonstrates the insecurity concerning the national identity of a large part of the Slavs in Skopje . I know that municipal review commission is investigating charges of illegal public procurement and lack of transparency of the contracts given to the architects. An all these at an estimated cost of more than 600.000.000 euros.

I suppose there is a clash of interests between different political and business groups. I cannot say which are the true  motives of certain politicians concerning their misgivings to Project 2014.

As far as I know president of opposition SDSM party, Zoran Zaev in an interview he gave to  “Radio Free Europe”, in the end of last June, he said that he looks for a solution that will protect «our national identity, our constitutional name». I do not see how that differs from what Mr. Gruevsky is saying.

Don’t forget that former President of Skopje Branko Crvenkovski, coming from SDSM, from the podium of the 62nd UN General Assembly stated that “the name of my country is and shall remain the Republic of Macedonia”. I remind again that your country was accepted as member of the UN under the condition that for the purposes of the UN, use would be made of the name FYROM. When political figures coming from SDSM ridicule UN inside the General Assembly conference hall I cannot see any difference with Mr. Gruevsky. If there is a difference then it is one of form not of substance.

Few months ago, the opposition leader Kyriakos Mitsotakis asked for early elections in your country, so do you believe there will be early elections here and what could a possible  change of the ruling party mean in regards to the name issue talks?

The biggest parties currently in Greece, Syriza which is the bigger government partner and Nea Dimokratia, larger opposition party, are of the same mind. That is, a compound name with a geographical qualifier which will be used in relation to everyone (erga omnes), for all uses domestic and international and not be limited for use between the two countries. The notion of geographical qualifier is debatable because the government of Skopje  has attached  the term «Macedonia» primarily an ethnological attribute.

Even in the case of an election, in the immediate future or later on, the official stand will not change and there will not be a shift. The change of government will have no impact upon the name.

Let’s finish with what we start, and that is your position on the name issue. Do you feel that this position has or will gain wider support among some of the political forces in Greece?

The biggest parties, as I mentioned, currently in Greece area of the same mind.

It should be pointed out though that there is no correspondence  between the official line of the state and the voters although it is difficult to see that because the parties which support the above mentioned solution form the big majority in the parliament. Issues of foreign policy do not attract, for the time being, the interest of the people in Greece since their attention is directed to the awful economic crisis but it is naïve to think that there will not be a reaction if this government or any government for that matter will attempt to accept a solution close to the preference of your country.

We experienced a similar situation in Cyprus where in 2004 the biggest party of the country the center-right DISI and a part of the communist AKEL supported the Anan plan which supposed to unify Cyprus but in reality legitimized the invasion, the illegal settlers and the demise of the Republic of Cyprus.

Two thirds of DISI voters rejected party line and voted against, the overall percentage being 76% against the proposed plan.

In case of a referendum the vast majority of the Greek people will vote against such a solution. We should always bear in mind that the people in Greece and the Greek Diaspora, indeed the whole nation, must accept the solution as well irrespective of what any Greek government does. Do not confuse Athens’s readiness for almost any solution with the overall disposition of the nation. They are not in correspondence. Repeated polling, on the name issue, over many years, demonstrates that lack of correspondence.

Also, we must take into account that the name issue is not strictly bilateral. Albanians form a part of your country and they should have a say on how their country will be called. Bulgaria has raised a number of issues concerning national identity and history as well.

I would like also to point that if what is happening with the name of Macedonia takes place for a number of other historical regions of Europe whose size and geographical extent varied through time like Banat, Karinthia, Lusatia, Dobrudja, Silesia. What the implications for the stability of borders in Europe would be; There is the international dimension on the name issue that cannot be ignored.

Although I am resentful of the appropriation of Greece’s historical heritage and arbitrary seizing of cultural symbols I do not hate  the people of your country. I understand that they inherited situations that took place in the past and that history, quite often bestows problems of the past that we must deal with.

I hope that we will stand firm on issues as serious as this is and not accept the abandonment of a part of our history but at the same time we should not allow our society to slide into fanaticism and actions that will blemish our standing in the world and undermine our democratic institutions. I do realize that this can be very hard to accomplish, when issues of national identity are at stake, but there is no other way if we Greeks want to keep our national integrity intact home and abroad.

In case of VMRO-DPMNE wins the next election how you see the situation unfolding?

The situation will continue as it is. I do not see any change. Foreign diplomats have advanced the idea that Greece should exhibit flexibility on the name issue due to the economic crisis. This suggestion is insulting because it implies that Greece should sell off the name in order to get better treatment from its creditors. Based on that logic Skopje, which have worse economic indicators  than Greece the last 25 years, should have retreated from its position many years ago. Issues of national identity cannot be solved through international agreements but only with the passage of time.